Three Ways To Get Rid Of Rats 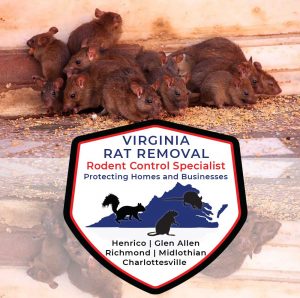 Three ways to get rid of rats is our guide for rat control for a home or business. Rats in a home or business can cause a lot of damage, contaminate food, and carry diseases. Unfortunately, you may not know you have a rat problem until it’s already out of control and you have a serious infestation.

The two most common rat pests in Virginia are the roof rat and Norway rat. Roof rats are relatively small, weighing between five and nine ounces, and have slender bodies and smooth gray coats. They can also be identified by their pointed snouts and large ears with no hair. Norway rats weigh between 12 and 19 ounces, have shaggy brown coats, blunt snouts, thick bodies, and short ears with dark hair.

Killing and trapping rats is much like controlling mice but on a larger scale. Traps are commonly used by homeowners and are generally effective if you don’t just set and forget them. Because they are designed to kill or capture the pest, rat traps must be regularly inspected, as a dead or dying rat or a food bait can attract secondary insects and cause an infestation.

Rat traps should be set where rat signs are seen and in out-of-the-way, hidden areas, especially in attics or basements and near food sources. Rat traps are much larger and more dangerous than mousetraps. Always take care to keep traps away from children or pets. Sometimes the best approach is to hire a professional pest control company like us to get rid of rats that have infested your home or business.

Our Three Ways To Get Rid Of Rats

Rat-sized wooden or plastic traps can be very effective for killing rats and are the least expensive option. When using a snap trap to capture a rat, be sure to use a larger trap labeled for rat control and not the mouse size trap. The much smaller mouse traps are not likely to kill or hold the rat, and could, instead, inhumanely injure the rodent.

It is important that all traps be placed where they will not be disturbed by children or pets, and that they are protected against accidental contact. Rat traps are powerful and can cause serious injury, especially to a child or pet.

Live catch traps use the rodents’ natural tendency to investigate and enter into openings and other holes. In these traps, the rodent can get in but cannot get out. This is often accomplished through a wind-up mechanism triggered by touch. When the rodent goes into the hole, the mechanism snaps it to the other side of the trap where it is captured. These traps must be regularly inspected and emptied, as needed. In addition, once captured, the rodent must be humanely killed or released where it won’t reenter the home or building or be of harm to others.

Bait stations are self-contained, enclosed devices containing an approved type of rodenticide. Rodenticide should not be used by untrained or unlicensed persons – it’s better to let a pest control professional use them due to the risk of accidental poisoning of children and pets. They are a good way to get rid of rats when used properly by a professional pest control company.

The bait station does not trap the rat. Instead, it contains a rodenticide that lures the rodent into the entrance of the station. The rat enters, eats some of the bait, and leaves through the station’s exit hole, then it dies (hopefully outdoors away from the house, but this is not always the case). The bait is entirely contained inside the bait station so it is protected against accidental contact or ingestion by children or non-target animals.

Signs of rat presence include:

Rats are attracted to homes for the same reasons mice want their way in: food and shelter. If you are providing rats with food or shelter, you are making it harder to get rid of rats. They’re always searching for a good place to hole up, and they always need something to eat. If you leave food (including human and pet food) readily available, rats will find it, and, worse, they’ll want to stay.

Like mice, rats like to stay in the shadows and typically enter a home through holes or cracks around the basement, foundation, or garage. Rats can fit through holes the size of a quarter, or slightly smaller than 1 inch. Roof rats lurk in high places and often enter homes via tree branches extending over roofs.

Once nested in your home, rats grow in numbers by having babies. Rats may have several nests, and they form family units consisting of a male, multiple females, and any new babies. They can begin reproducing at three months of age and typically live for one year.

How to Prevent Rats from Moving Into Your Home or Business

The best way to prevent rats from becoming your roommates is to make your home uninviting and inhospitable. Holes and gaps in walls and along roof eaves are inviting. Plentiful sources of food and water are their favorite forms of hospitality. While you can’t exactly rat-proof your home (they’re very clever, persistent, and physically adept), you can make your home less inviting by sealing holes, cracks, gaps, and other potential entrance points in exterior walls, soffits, roof vents, chimneys—any element that leads to a place of shelter.

Want to get rid of rats? Don’t use expansion spray foam to fill gaps – rats are chewers and will quickly chew threw this material. Instead, fill gaps and patch large holes with galvanized hardware cloth, plywood, cement board, siding, or other exterior-rated material. Another easy entrance to a home is damaged or missing crawlspace doors and foundation vents. Attic or gable end vents should also be animal proofed with hardware cloth.

Tidy your home’s exterior by removing leave or debris piles, especially those near the house, and keeping all garbage in covered cans. Cut back tree limbs away from the roof and exterior walls. Keep stacks of firewood away from the house – this is also an attractant for snakes, particularly Copperheads.

Remove potential food and water sources for rats by keeping pet food in sealed containers, repairing leaky outdoor faucets, eliminating puddled water, and keeping the house clean – no dishes soaking in the sink overnight. Store food in covered bins if it’s not out in the open or in the refrigerator. Long-term storage caches of food are prime targets for rats.

As its name indicates, this rat is most likely to be found in higher places and upper levels of the home. Their droppings are spindle shaped. Traps should be placed off the ground in the attic, next to rafters in the roof, and along shelves and ledges. Roof rats like to nest in the insulation and hollows of an attic, in areas where the rafters meet the exterior walls.

The Norway rat doesn’t climb as much as a roof rat. It travels and nests in low areas, such as basements, under piles of debris, and in lower levels of the house. Traps should be placed in hidden areas, along walls, in dark corners, etc. The Norway rat’s droppings are capsule-shaped.

To get rid of rats use need a quality rat trap with a good rat bait. Dry pet food can be a very attractive bait for rats, Canned nuts, dried fruits, and dried meats, such as bacon are also a great bait. These can be attached to the trap with thread, wire, or even glue. For rats, soft baits, such as peanut butter and cheese, are not always effective, because the rat can sometimes pull off the bait without snapping the trap and the baits quickly dry-out.

Glue boards are not usually very effective in rat control, as these larger rodents often pull themselves loose from the glue or, if caught by only a foot or two, they can simply drag the board around causing it to stick to other things. Glue boards are generally considered less humane than other traps because they do not kill the rodent; they just keep it stuck until it starves to death or until it you manually kill it.

Need more information on our rat control or mouse removal services? Let us help you get rid of rats.